Warning: "continue" targeting switch is equivalent to "break". Did you mean to use "continue 2"? in /home/xpressv1/public_html/wp-content/plugins/revslider/includes/output.class.php on line 2941
 Hina says Priyank betrayed her; Akash and Arshi fight UGLY - Xpress Vids

Why the backlash Hina Khan is receiving from the industry is just too much! 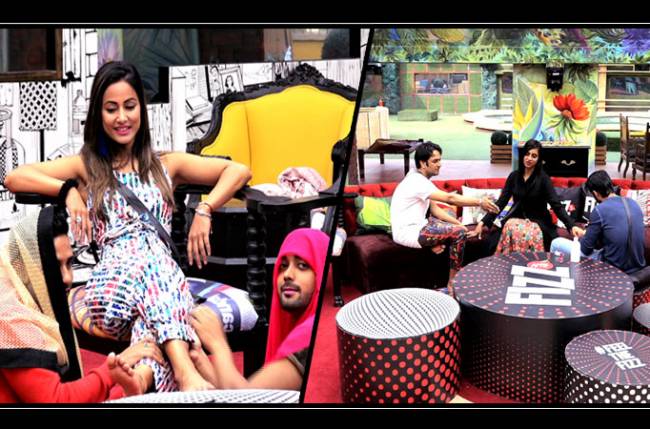 They say – ‘Don’t underestimate the power of a woman’ and rightly so! Today, Bigg Boss 11 will see the women take over the house and rule it in their own unique way! With only 3 women left in the house, Bigg Boss has decided that it is indeed time for them to take a step back and relax! The men of the house are mandated to serve the women and be at their beck-and-call!
Hina reads the task and reveals that Puneesh and Luv would be her personal servers; while Akash and Priyank are to follow Shilpa’s orders and Vikas and Hiten are to be at Arshi’s mercy. Hina takes advantage of this task and gets Puneesh and Luv to dress up as women, donning fancy sarees complete with hair and make-up! Shilpa decides to take it easy and palms off all the house chores to Priyank and Akash. Lastly, Queen Arshi wants to be pampered and makes Hiten and Vikas give her both a massage and a manicure! Family man Hiten tries to reason out with Arshi but fails and has to do as she says! Her next orders for Vikas and Hiten are to jump into the cold swimming pool together.
However, the fun ends when the gharwale witness a major showdown between Akash and Arshi. What started as a discussion over eggs turned into an argument about being ‘Real and Fake’.
But the true test of friendship in the house is between Hina and Priyank. During Weekend Ka Vaar, Salman asked Priyank if he felt that Hina was insecure about her position in the house, and Priyank’s affirmative answer shattered Hina’s feelings. She takes this up with him and says that she felt betrayed and let down. She breaks down and it is evident that the friendship they built over time is in danger.
Will Priyank will be able to save their friendship?