Why the backlash Hina Khan is receiving from the industry is just too much! 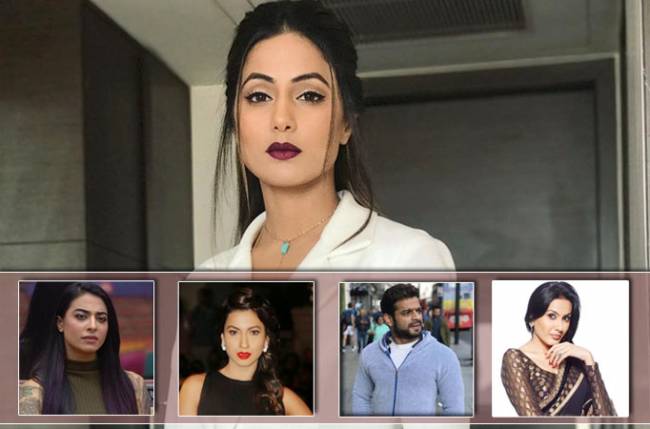 Disclaimer: The whole article is about the controversy around Hina’s statement on Gauahar, Sakshi and Sanjeeda, in a video that went viral recently. We are in no way trying to justify Hina Khan’s behavior in the Bigg Boss house. This article solely revolves around the viral video.
The past few days have been quite a ruckus on the social media with respect to Bigg Boss. The whole television fraternity came together to stand in unison against Hina Khan. Hina Khan’s journey inside the Bigg Boss house has seen quite a downfall since the inception. Be it her “thool-thoola” comments on the actresses from the South Indian film industry or her comments on TV stalwarts like Gauahar Khan, Sakshi Tanwar and Sanjeeda Sheikh, Hina has rubbed the industry, the wrong way.
(Also Read: Is the whole industry turning against Hina Khan? The war is on!)
Her questioning Gauahar’s followers and calling Sakshi squint eyed didn’t go down well with the TV fraternity. In a matter of some time, the whole industry took on to Twitter and slammed the TV bahu left, right and centre.
However, we tried diving a little deeper into the matter only to realise that the backlash, Hina is receiving is quite unreasonable. Agreed that Hina is not the friendliest and charismatic inmate in the house, nonetheless the whole industry cornering her for one statement is oblivious.
For starters, the video that went viral through a twitter handle was edited. The whole unedited video was shared by a fan of Hina Khan in which Hina was stating how great a fan she is of Sakhi Tanwar’s acting. On Sanjeeda Sheikh, Hina was actually quoting a fact about fair people. It is a known fact that people who are very fair have to tone down their fairness to look good on the screen. Giving Sanjeeda’s example, Hina stated the same. Later, her co-inmate Vikas Gupta also agreed to the same fact.
Haven’t we all as a human beings ever spoken about someone else? Be it anyone, we have all voiced our opinions about other people. Notwithstanding the fact that speaking ill about someone on national TV is wrong and immoral, we also need to understand the gravity of the comment. Her comments on Sakshi, Gauahar and Sanjeeda were not severe enough to receive such royal bashing. Hina is known for her pompous nature maybe that could be the reason people misconstrued her.
What also makes us wonder is why just Hina Khan? If you see the video you’ll realise that Hina was just conjecturing (that Sakshi is cross-eyed) but Arshi literally called Sakshi not so beautiful. But no one cared about Arshi’s statement. In the video Vikas Gupta agrees to Hina’s statement alluding to the fair people and also add his opinion, however, he was not put to task! Not just that, it was a room full of people while discussing Gauahar’s followers on social media, present were Vikas, Arshi and Puneesh – nevertheless it was just Hina who came into everyone’s eyes. Don’t you think, it would only be fair that the other contestants should also be bearing the brunt and not just Hina?
(Also Read: Karan and Kamya lash out at Hina yet again!)
While, Hina’s statement over the South Indian industry created a furore, the statements made by the other housemates literally fell on deaf ears. An unseen video has Shilpa Shinde saying that the Marathi film industry is filled with ego. No one raised a question on that?
Maybe it is because of Hina Khan’s stature as a TV actress that all her mistakes are magnified or maybe it is her hypocrite/pompous nature that has irked everyone to such a core that all her mistakes are magnified. Whatever be the reason we can say that once the Yeh Rishta Kya Kehlata Hai fame actress comes out of the show she will have only few friends left from the industry.