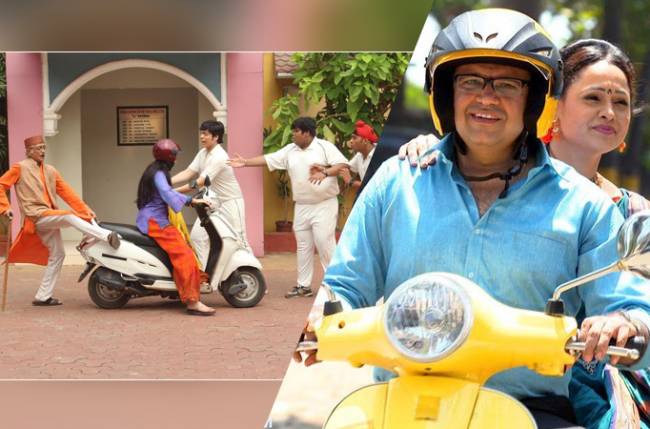 The new episode will begin with a news break out that a passenger has slapped an auto driver, and in response to this act, all the auto drivers in the vicinity have called for a three to four day strike!

Gokuldhaam men are stuck as they need to reach their work places soon but cannot see any mode of transport in sight. Sodhi comes to the rescue as he offers to drop them in his car. But, one person is left behind. Bapuji wants to go meet his friend who is sick and he has no mode of transport. Jethaalal suggests that Bawri can take him in his scooter.

When Bawri arrives in Gokuldhaam society, she sees Tapu Sena. “Why don’t you learn how to drive a scooter? It’s an essential life too. I learnt it when I was much younger than you.”

This got their young minds racing and they realized that it is high time they learn how to ride a scooter.

Who better than the woman who gave them the idea, Bawri herself? So they ask Bawri to teach them how to ride a two wheeler and decide that they will have practice sessions in late evening as no adult should come to know.

But there is one glitch. Bawri’s scooter is not available as she has given it to her sister for a month.

As if on cue, Tapu Sena’s eyes fall on Bhide’s scooter, his love – the Sakharam. The kids decide to learn how to practice using Sakharam!

Bawri-Bagha also agrees. The deal is signed. They decide to meet late in the evening where Sonu will quietly take spare keys of Sakharam.

On the other hand, Bhide is having sleepless nights dreaming about Sakharam meets with an accident…

Will Bhide get to know about these secret lessons?

What if, in a quest to learn how to ride the scooter, Tapu Sena lands in an accident, harming Sakharam?

Watch this exciting track from tonight.