Warning: "continue" targeting switch is equivalent to "break". Did you mean to use "continue 2"? in /home/xpressv1/public_html/wp-content/plugins/revslider/includes/output.class.php on line 2941
 Mallika Dua's father slams Akshay for vulgar joke - Xpress Vids 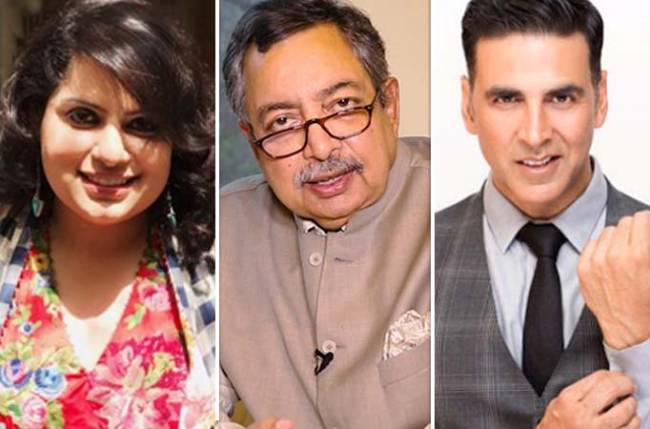 Comedienne Mallika Dua’s father and journalist Vinod Dua on Wednesday slammed actor Akshay Kumar for making a vulgar remark at his daughter.
“I am going to screw this cretin Akshay Kumar for telling his co-worker Mallika Dua that ‘Aap bell bajao, main aap ko bajata hun’ (You ring the bell, I will bang you)… This is his sense of humour and language… Star Plus… Wake up,” Vinod wrote on Facebook.
He posted alongside it a clip from the shoot of popular comedy show “The Great Indian Laughter Challenge”, in which Akshay made the remark.
Mallika also shared the clip on the social media site and wrote: “Hey! Quick question. Does anyone find 5:26 funny? Charming? Entertaining? Family entertainment. GEC.”
Vinod told IANS: “I don’t expect an apology from Star Plus as they have not aired this episode. But I expect an apology from this fellow (Akshay).”
Akshay is a Super Judge on the show. He made the remark when Mallika’s fellow judge Zakir Khan asked Akshay that they will also accompany him to ‘ring a bell’ as a mark of appreciation for contestant Shyam Rangeela, who mimicked Prime Minister Narendra Modi.
This act was not aired on the channel and is part of extra footage, according to a source.