Warning: "continue" targeting switch is equivalent to "break". Did you mean to use "continue 2"? in /home/xpressv1/public_html/wp-content/plugins/revslider/includes/output.class.php on line 2941
 Hina Khan ABUSES Bandgi Kalra during a bitter fight in Bigg Boss 11 - Xpress Vids

I was into a dark phase…yoga brought light into my life, says Vidya 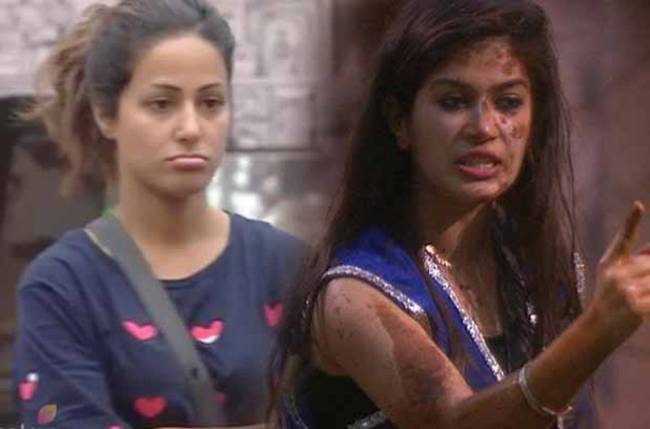 Bigg Boss house has been mired in all sorts of controversies right from the very beginning. There have been fights and issues galore with all the contestants of the Bigg Boss mansion. It all started with Vikas and Shilpa fighting with each other over things that transpired between the duo in the past. It meandered from the various captaincy battles and the sudden eviction of Priyank Sharma from the Bigg Boss mansion.
This time over the host of the show was not spared by a contestant on the show Zubair Khan who made sure an FIR was filed against the actor, the channel and the production house as well.
The biggest fight amongst the inmates till date has been that of Akash Dadlani and Hina Khan’s. Akash had refused to accept Hina Khan as the captain of the house and made sure he did not do anything in the house for that week. But the tables turned during the task because thjat’s when Hina nominated Akash. And the two of them have been at loggerheads since then.
According to a source, things are not going to be a smooth sail ahead either.
Do you know the latest? This time Hina blamed Akash for spitting in her food, however Puneesh negated the claim right from the very beginning because it was him who had served the food. And this time Bandgi chipped in as well. She seconded Puneesh and told Hina, Akash didn’t do it and that she was lying. That was the last straw. Hina and Bandgi began arguing bitterly with each other. One thing led to another and it turned into a bitter brawl. It was during this brawl when Hina lost self control yet again.
Hina has always been creating ruckus in the house, due to this attitude the inmates too have started hating her. This time it is Bandgi who bore the brunt of Hina’s anger. Hina abused Bandgi and didn’t think twice before involving her father in it as well. This is something that never happened in this season. The inmates were fighting amongst themselves but no one brought each other’s family in the picture.
Hina has abused Bandgi’s father and she has to bear the repercussions of this vile act of hers in the time to come. What happens next is to be seen.