Warning: "continue" targeting switch is equivalent to "break". Did you mean to use "continue 2"? in /home/xpressv1/public_html/wp-content/plugins/revslider/includes/output.class.php on line 2941
 Dhanteras Special: Bigg Boss 11 contestants and the jewelleries they remind us of - Xpress Vids

Dhanteras Special: Bigg Boss 11 contestants and the jewelleries they remind us of

Ali Fazal and Shriya Pilgaonkar come together for a Web Series

Rohit Khurana to don the role of grown up Shani 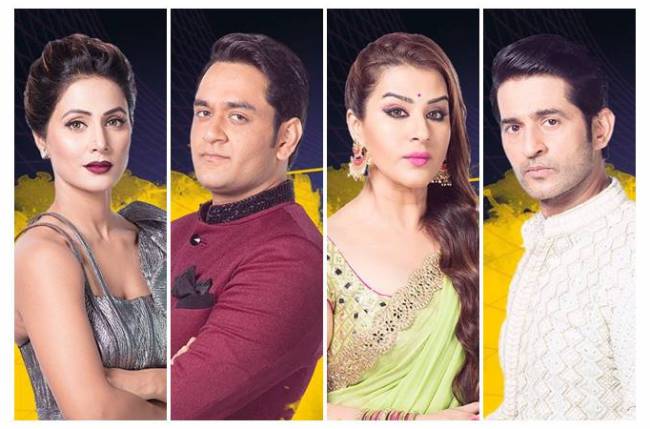 To begin with, wishes all its readers an opulent and buoyant Dhanteras. For an occasion known for wealth and prosperity, we have an interesting story. Well, this month one show on television that is buzzing the most is the controversial reality show Bigg Boss in addition this month also marks the auspicious day of Dhanteras. The notorious house has some really crackling contestants this year, making us think if Dhanteras and Bigg Boss could be merged together as an idea?
Therefore, is now ruminating on what jewellery could each of the Bigg Boss house inmate be related to. If you think that is weird, we would want you to stop everything that you are doing for a while and try to picture it. The way you would do it is up to you. Some could be wearing the ornaments while some could be playing with them. And after a little while, it will not anymore be a figment of your imagination because then the line that separates imagery and realism will surely become blurred.
Hina Khan – Maang Teeka

Well, you know what maang teeka’s do right? They sit royally on your head and make you look royal. That’s exactly what Hina is doing in the house right? TV’s favorite bahu is highly commanding and is known for her pompous attitude.
Hiten Tejwani – Diamond ring

Diamonds are polished, sparkle the most and are the choice of sophisticated. Not everyone prefers a diamond but those who do well; we can just applaud their choice. The classiest contestant this year in the glass walled house is Hiten Tejwani. He has all the qualities of a diamond ring. Don’t you think the same?
Arshi Khan – Nose ring

Perky, loud and in your face! These words are not meant to describe Arshi, they are just to describe a nose ring. However, if the shoe fits well, you can just wear it. She is one entertainer in the house who easily resembles a nose ring. Both can easily poke and their absence can lead to a lackluster appearance.
Shilpa Shinde – Payal

Shilpa began clinging like anklets right at the big premiere of Bigg Boss 11. She has always been clunking in the show, at times with Vikas with regards to their past and of late with Arshi. She never stops. It is more of an ongoing thing with her just like anklets, when you walk it makes this clunking sound. We don’t know about anyone else but the audience is surely entertained.
Akash Dadlani – Chain

Chains can never remain still at one place. They keep on oscillating from one end to another. Not to forget, they don’t leave your body. Does it remind you of any BB contestant? Well – Akash Dadlani! He is one contestant who is still unsure of what he is doing in the show (not more than Lucinda, Jyoti, Sabyasachi and all). However, he is still hanging in the middle. Not to forget, he can easily throw himself at anyone (Lucinda, is surely happy to be out of the house) just like a neck piece.
Vikas Gupta/Sabyasachi Satpathy – Kangan

Vikas and Sabyasachi are just like a kangans (Bangles). You never know when he might start sounding like one – khan khan Khan. There are times when he keeps quiet and there are times when all of sudden, things just go ballistic with them. And then begins their verbal diarrhea which barely comes to an end.
Sapna Choudhary – Kamar Bandh

We don’t want to stereotype her but Sapna does remind us of a slender yet beautiful Kamar bandh. Not just because Choudhary is a well known dancer in the northern belt but also for other reasons. A kamar band is the most interesting ornaments. It is sparingly used but whenever it is used, it gives a special touch to a woman’s femininity. And this attribute is very much semblative to Sapna’s characteristics. she just flares up at times and when she does, it is nothing short of ‘dhaamaakedaar”
So now do you guys agree? Comment below which other contestant resembles other jewelries.