Warning: "continue" targeting switch is equivalent to "break". Did you mean to use "continue 2"? in /home/xpressv1/public_html/wp-content/plugins/revslider/includes/output.class.php on line 2941
 Supreme Court refuses plea to ban the release of Padmavati - Xpress Vids

Supreme Court refuses plea to ban the release of Padmavati 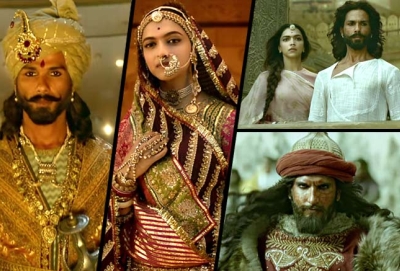 A Bench, comprising Chief Justice Dipak Misra and Justices A.M. Khanwilkar and D.Y. Chandrachud, said there were enough guidelines to be followed by the censor board to grant certification to a film before its release.

The plea, filed by Siddharajsinh M Chudasama and 11 others, also sought the setting up of a committee of eminent historians to check the veracity of the script to prevent any inaccuracy in the portrayal of Rani Padmavati.

The petitioners sought a stay on the release of the film till such time the alleged historical inaccuracies in the film are corrected by the producer and the director.

The film, which also stars Shahid Kapoor as Rawal Ratan Singh and Ranveer Singh as invader Alauddin Khilji, is set for release on December 1, 2017. The movie has been a subject of many controversies. Some Hindu groups and political parties, including the Congress and the BJP, claiming that the film distorts history and wrongly portrays Padmavati, a contention Bhansali has rebuffed in a recently released online video.

Earlier this year, fringe group Rajput Karni Sena vandalised the sets of the film in Jaipur and roughed up director Sanjay Leela Bhansali.

Bhansali and his team have repeatedly assured the opponents that there are no romantic scenes between Deepika and Ranveer in the film. Gupta has written a letter to Home Minister Rajnath Singh about the matter.

The activist group objected to an alleged scene that would have Allaudin Khilji (played by Ranveer Singh) romancing Rani Padmavati (Deepika Padukone) in a dream sequence.

Last month, its members destroyed a “rangoli” created at a Surat mall for “Padmavati” promotions and threatened further disruption.

The film has been embroiled in a spate of controversies ever since its inception. The rumours claim that the film has a dream sequence between Rani Padmavati and Alauddin Khilji – something that I have already denied, even in writing. “Today, again, I am reiterating through this video that in our movie, there is no such scene between Rani Padmavati and Alauddin Khilji that would hurt the sentiments of anyone”. No community will be able to tolerate it and this is why distributors across the country have started giving the cold shoulder to this film, the BJP leader added.

With the release date of Sanjay Leela Bhansali’s Padmavati approaching, its troubles seem to be mounting as well.

Keeping sentiments of Rajput groups in mind, the BJP said that they preview the movie as as many fringe groups have threatened to disrupt its screening for “manipulating historical facts”.

There has been a widespread uproar against the movie which is scheduled for release on December 1. Recently, the Karni Sena had staged a huge protest in Chittorgarh in which hundreds of people took part demanding a complete ban on the film. The protesters had urged the Election Commission (EC) to ban the film in Gujarat or shift the release date of the film post the elections.