Warning: "continue" targeting switch is equivalent to "break". Did you mean to use "continue 2"? in /home/xpressv1/public_html/wp-content/plugins/revslider/includes/output.class.php on line 2941
 Salman Khan and Katrina Kaif to be seen on Bhabhiji Ghar Par Hai - Xpress Vids

Congratulations: Pooja Banerjee is INSTA Queen of the Week! 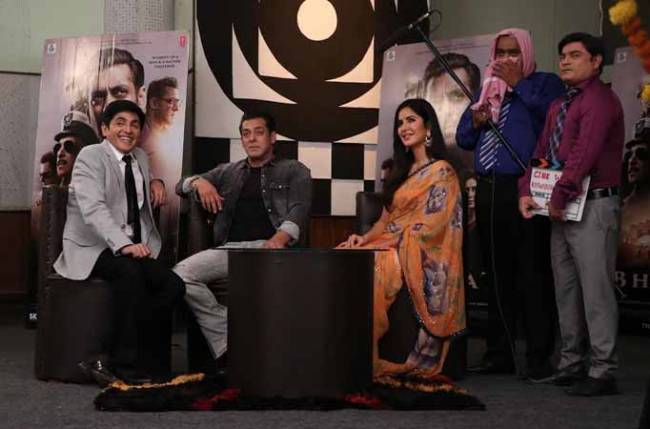 MUMBAI: What will happen if Vibhuti Mishra meets superstar Salman Khan? Well, you don’t have to get your imagination running because this has now become a reality! The viewers of &TV’s popular show Bhabhiji Ghar Par Hain are in for a huge treat, as Bollywood ‘s bhaijaan, Salman Khan will make an appearance on the show along with the beautiful Katrina Kaif who will be seen promoting their upcoming blockbuster film Bharat. What is even more exciting is, Aasif Sheikh a.k.a Vibhuti will be seen in the eagerly awaited film Bharat alongside Salman. Salman and Aasif will reunite in this film after 12 long years. The two share an extremely close bond having worked in several movies together in the past.

The hilarious episode will see Vibhuti’s quest to land a job of a journalist on the only condition that he succeeds in getting Salman and Katrina’s interview who are visiting Kanpur for their film Bharat’s promotion. An over confident Vibhuti reaches the venue with his novice camera crew of Tika, Tillu and Malkhan and requests Salman for an interview to which he agrees. Everything goes well and Vibhuti is on cloud nine having cracked this huge interview.

Talking about the sequence with Salman and his bonding with the superstar, Aasif Sheikh said, “Salman and I go way back and our friendship has grown over the past 28 years. We’ve worked in the day and partied at night; that’s the kind of camaraderie we share. Even for this particular sequence on Bhabhiji Ghar Par Hai we didn’t need a script. The viewers will see a pure and candid conversation which is in the form of an interview. I am glad that we’ve reunited again for a film like Bharat and I hope the audience showers their love on us.”

Viewers brace yourself for an exciting and rib-tickling episode which will be a paisa vasool entertainer!