Warning: "continue" targeting switch is equivalent to "break". Did you mean to use "continue 2"? in /home/xpressv1/public_html/wp-content/plugins/revslider/includes/output.class.php on line 2941
 Did Salman Khan evict Sapna despite HIGHEST number of votes? - Xpress Vids

Did Salman Khan evict Sapna despite HIGHEST number of votes?

Congrats: Nia Sharma is the Insta QUEEN of the Week! 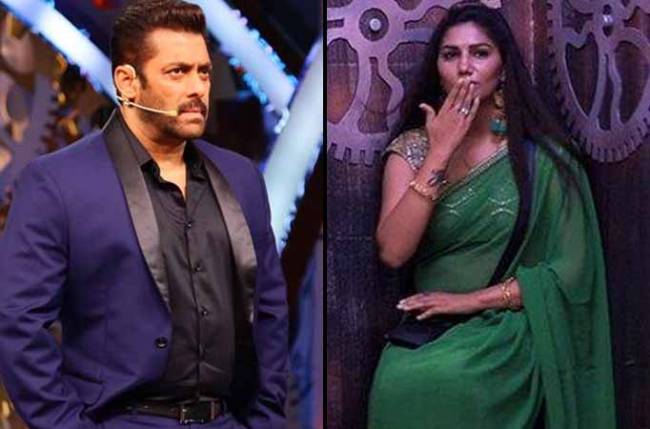 The controversy surrounding the Coors’ flagship reality show Bigg Boss 11 will not cool down anytime soon. The show has been mired in several controversies right from its inception.
And now, the show is yet again in the news and this time not for the fights akongst the inmates, this time it is for the eviction results.
This time as everyone knew four contestants were nominated for last week’s eviction and all of them were the strongest contenders of the season. Shilpa Shinde, Sapna Choudhary, Hina Khan and Priyank Sharma. During the last Weekend Ka Vaar episode of Bigg Boss, Salman Khan evicted Sapna Choudhary. He said that she has got the least amount of votes, that’s why she has been evicted.
Salman Khan announced Shilpa Shinde is safe on Saturday’s episode, this meant that anyone contestant from Hina Khan, Priyank Sharma and Sapna Choudhary would be evicted. On Sunday’s episode, Bigg Boss introduced a unique elimination process, where a rotating chamber was introduced. All there nominated contestants were made to sit in the chamber and one contestant, who won’t come out of the chamber would be automatically evicted. At the end of the task, Sapna Choudhary was eliminated from the Bigg Boss 11 house.

The eviction of Sapna Choudhary has come as a total shock to fans as well as the housemates. Even we are pretty shocked to see the result. After all, Sapna has a huge fan following especially in North India. In fact, her fans were even running ads in the major newspaper of Haryana asking people to vote for her. That is the reason; we are unable to digest the fact that she has been evicted from the house this week.
In a shocking turn of events, a leading news portal has published that Sapna Choudhary had received the most amount of votes. In fact, Sapna got many more votes than Shilpa, Hina, and Priyank. According to the report, it was Priyank Sharma, who has got the least amount of votes. The report further states that the makers took the decision of eviction based on the content than the number of votes. The portal has also shared a snapshot of the number of votes received by all four nominated contestants.
We were unable to verify the authenticity of this result, as there are no means to do that. However, the eviction of Sapna is still a questionable decision because they’re a strong campaign running in order to save her. When we asked viewers about who should be evicted from the house, Priyank Sharma and Hina Khan got the least amount of votes.
Eviction process has always been under the scanner, as there is no transparency on the eviction process. It is also not the first time; the makers have taken the decision of eviction based on the content rather than the votes. There were several stories about the same in previous seasons as well. Even some contestants have asked questions about the eviction process.
Now it is left up to the audience, what do you think? Leave your opinion in the comment section below.
And yes, are you happy with Sapna Chaudhry’s eviction?