Warning: "continue" targeting switch is equivalent to "break". Did you mean to use "continue 2"? in /home/xpressv1/public_html/wp-content/plugins/revslider/includes/output.class.php on line 2941
 ‘Upma’ nightmare for Jethaalal in Taarak Mehta - Xpress Vids

Roshni Sahota on her birthday: I have been cutting cakes since 12 days now

Harman to help Kinnars rebuild their house in Shakti 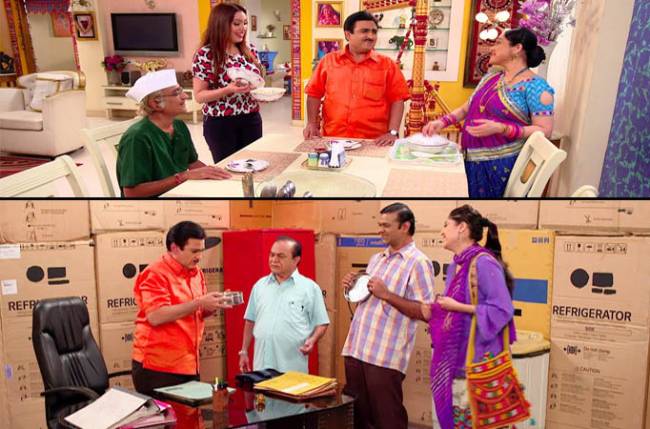 It seems Jethalal’s life will never be devoid of problems in SAB TV’s Taarak Mehta Ka Ooltah Chashmah.
The Neela Telefilms’ show is set to bring yet another exciting episode revolving around Jethalal (Dilip Joshi).
According to the plot, When Jethaalal Gada will be all set to leave for his work, as usual, he will sit down at his table to have breakfast cooked by his wife Dayaben (Disha Vakani).
Jetha would be very hungry and he would be looking forward to have a satisfying and delicious meal, but unfortunately what lands in his plate is tomato ‘upma’ (Semolina).
He would then lie to Daya and Bapuji that he never liked upma and gets acidity by upma just because he wouldn’t want to eat it in the first place.
Later, Babitaji enters with a surprise for the Gada family and tells them he has bought home-cooked food for them. Excited, Jethaalal asks what food dish has she bought! ‘UPMA’ pat comes the reply.
Jethaalal reels in disappointment. As much as he wanted to taste the upma which was cooked by Babita, he cannot do so because he had earlier bluffed about having acidity due to upma.
Frustrated and hungry Jethaalal now leaves for work and that is when he would meet his best friend Taarak on the way. Jetha would request Mr Mehta to accompany him to a restaurant and have a ‘masaledar’ breakfast. Thinking of ‘pav bhaaji’ and ‘samosas’, he finds only ‘UPMA’ on the menu.
Jethaalal goes to his shop, even more hungry and frustrated. But his bad luck isn’t yet over as Bawri had chosen this particular day to bring breakfast for Bagha, Nattu Kaka and Jethaalal. And guess what Bawri will get? Yes, it’s UPMA!
Will Jethaalal go hungry for the day?