Warning: "continue" targeting switch is equivalent to "break". Did you mean to use "continue 2"? in /home/xpressv1/public_html/wp-content/plugins/revslider/includes/output.class.php on line 2941
 RIP: Rani Mukherji's father Ram Mukherji passes away - Xpress Vids

Bigg Boss 11: A big TWIST in this week’s eviction 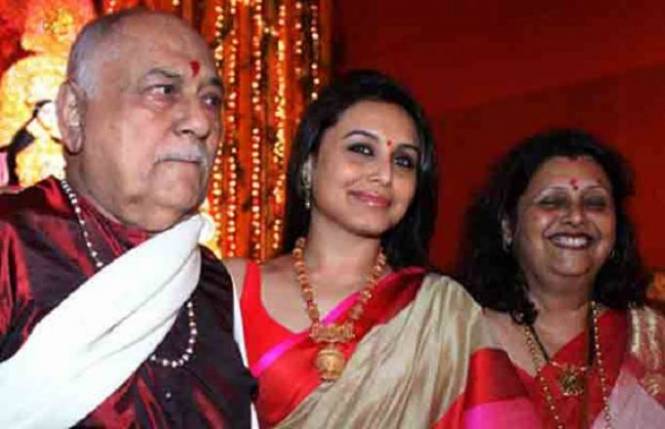 Acclaimed actress Rani Mukerjee’s father Ram Mukherjee died on Sunday at 5:00 AM in the morning. According to a source, his body will be taken to his house ‘Janki Kutir’ at 10: 30 AM. The cremation is scheduled at Vile Parle Pawan Hans at 2: 00 PM. The veteran was 84 years old. The exact cause of his death is yet to be known.
However a distraught Krishna Mukherjee told us, “he was not well since the past few days, the doctors were tending to him, he was okay during the Diwali bash that was held. But we didn’t know what was coming. There was a sudden drop in his blood pressure following which, he was immediately rushed to the Breach Candy hospital, where the doctors declared him dead at 5 A.M today.
This is really unfortunate because just a few days ago Rani had hosted a grand bash on the occasion of Diwali attended by close friends and family members. Her father was a part of the ocassion as well. Ram Mukherjee was an Indian film director, producer, and screenwriter. He was also one of the founders of Filmalaya Studios in Mumbai. He is popularly known for films like Hum Hindustani and Leader, which featured Dilip Kumar and Vyjayanthimala.
Mukherjee- Samrath family is a well known family in the film industry. His wife Krishna Mukherjee is a playback singer, whereas his daughter Rani Mukherjee is a very famous Bollywood actress. She has worked in numerous Bollywood films and has given several memorable characters. His son Raja Mukherjee is a producer and director, who has assisted his father in many films.
Ram Mukherjee also directed his daughter Rani Mukerji in her first film Raja Ki Aayegi Baraat.