Warning: "continue" targeting switch is equivalent to "break". Did you mean to use "continue 2"? in /home/xpressv1/public_html/wp-content/plugins/revslider/includes/output.class.php on line 2941
 Life OK shows to end by 27 August; here’s how they will conclude! - Xpress Vids

Life OK shows to end by 27 August; here’s how they will conclude! 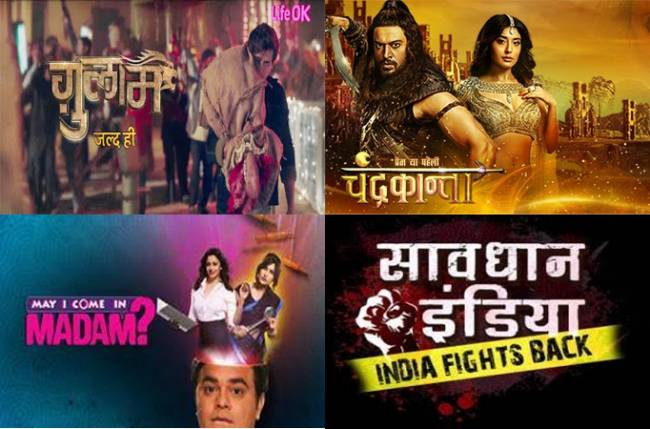 The whole Life OK revamp has been a topic of discussion in the media circuit.
New shows are already lined up and yet many are curious when the revamp will take place.
We have some exclusive details on the topic!
A little birdie has revealed to us that all the shows of Life OK will end on 26 and 27 August. The new array of shows will either start by 28 August or 1st week of September.
The channel is currently airing four shows – May I come in Madam, Ghulaam, Chandrakanta and Savdhaan India. All these three shows except the latter will conclude and here’s how they will.
May I come in Madam (Edit II) – The quirky fun drama will end on a good note. The show won’t end with a cliffhanger and will have sweet concluding story. The soap’s producers have already pitched for a season 2 and approached the leads for the same. Now one just has to wait and watch if the show would make a comeback on the new Star Bharat Channel.
Chandrakanta (Triangle Films ) – The fantasy based show will end on a high voltage cliffhanger. The actors have already wrapped up shooting yesterday (August 9). Chandrakanta was always supposed to be a 52 episode series. Marich, Kroor, Virendra and Shivdutt’s chase for Tilism and Chandrakanta will continue. The viewers will be left in suspense about who will finally get the tilism and win over the charismatic lady. The final episode will air on August 27. Nonetheless, there are chances that the show might come back with season 2 to continue with the leftover story.
Ghulaam (Parin Multimedia) – Ghulaam’s sudden shutting down; post the whole Niti Taylor’s exit fiasco left everyone shocked. The star cast will shoot for the final episode on August 14 and the episode will air on 25 August. The show will end on high note with many characters going through a major transformation, leaving the viewers shocked. Apparently, it is heard that Rashmi Khare played by Sarika Dhillon will get married in the final episode, now to who is a question.
As for, Savdhaan India, the series will be on air even on the new channel with Sushant Singh being the face of it.
Stay tuned to Tellychakkar to read more such exclusive news stories.