Warning: "continue" targeting switch is equivalent to "break". Did you mean to use "continue 2"? in /home/xpressv1/public_html/wp-content/plugins/revslider/includes/output.class.php on line 2941
 Five web series of 2018 to watch out for - Xpress Vids 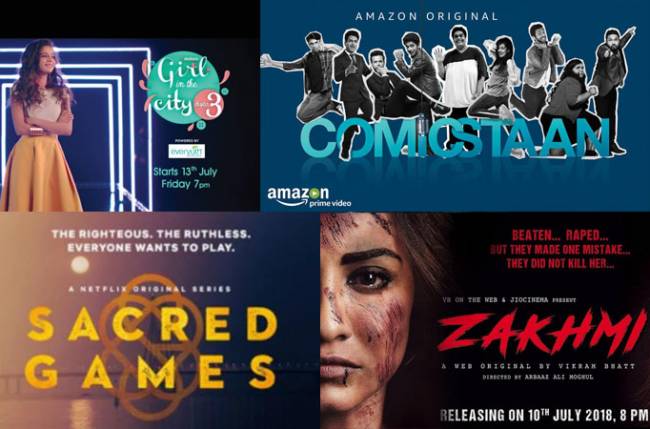 In the era of digital media, youngsters and professionals are moving to TV viewing to digital viewing. The shift has been humongous. Bindass, ALT Balaji, Amazon Prime, Netflix and various YouTube channels have been pouring us with entertaining and strong content driven web series.

Girl In The City Chapter 3

After the resounding success of earlier two chapters of Girl In The City, Bindass Originals’ is back with its third chapter. The web series has the stellar star cast – Mithila Palkar, Rajat Barmecha and Swati Vatssa—who will take the viewers on the amazing ride of friendship, drama, and off course, a lot of fashion. The story focuses on Meera Sehgal (essayed by Mithila Palkar) who is from a humble family, and who like millions of others, has come to Mumbai to fulfill her dreams. The first two seasons played a critical role in the life of Meera Sehgal but this season will be either make it or break it for her. The show is all set to launch on Bindass Facebook, YouTube and Bindass App on 13 July 2018.

Comedy is going to turn tragedy for 10 comedians as they witness few amazing comic talents in the nationwide hunt to become India’s next big comic sensation. Comicstaan will be judged and mentored by Tanmay, Kanan, Kaneez, Biswa, Kenny, Sapan and Naveen Richards. It will be co-hosted by Abish Mathew and Sumukhi. It will start streaming on Amazon Prime Video India on 13 July.

Saif Ali Khan, Nawazuddin Siddiqui and Radhika Apte starrer Sacred Games is the first Indian original series to premiere on Netflix. Sacred Games is a crime drama based on the novel of the same name by Vikram Chandra and deals with the ruthless underbelly of Mumbai, a subject that has previously been dealt with by several Bollywood filmmakers in the past. Therefore, it would be interesting to see which new element the makers will bring to the table with the show. The series will premiere on 6 July.

Hum has created quit a stir among the audience with a strong cast in the names of Kushal Tandon, Ridhima Pandit and Karishma Sharma since the very start. The story is about relationships, affairs and family which will be told through the lens of three sisters. Earlier, the title of the show wasKapoors which has recently renamed as Hum. The web series will soon be streaming on ALTBalaji.

Zakhmi is an upcoming web series by Vikram Bhatt, releasing on 10 July, 2018. It’s a story of a simple girl Saira who sets out on a mission to avenge her husband’s murder, only to reveal bigger conspiracies involved, and realise the fact that her battle is against none other but those who she thought were her own people. Tia Bajpai, Ruslan Mumtaz, Vipul Gupta, Peeyush Suhane and Snigdha Akolkar will be seen playing pivotal roles.